For a long time i’ve wanted to experiment with running a small cluster on my Raspberry Pi’s, but I’ve always had lots of other things to do. Recently i started moving my hosted services from my NAS onto a single Raspberry Pi, and came across a few older Raspberry Pi’s, and thought now is a good a time as any, so here goes.

I used the following components:

Each of the Raspberry Pi’s is configured using a standard Raspbian Lite image with ssh enabled.

I went through the setup detailed here, and installed Docker on each Raspbian installation using the installation method from here

I loosely followed this guide for setting up the actual swarm.

Some services, like gogs have specific user requirements, so i took some time and made sure /etc/passwd and /etc/groups were identical on all nodes.

Only one of the nodes has a hard drive attached, so i labelled it “storage=true” The rest of the nodes access this storage area via nfs.

After setting up, i ended up with something like this

The swarm is now configured and ready to go.

Adding a service to the swarm requires a bit of different syntax than the usual “docker create” syntax. To create a swarm service, you instead use “docker service create”, which publishes the service to the swarm, and the manager node automatically finds a suitable node to host the service, or nodes in case you’ve specified multiple instances.

To create an instance of the Ghost blogging platform, i used the following command

To view the logs of a running service, you issue

And logs are displayed like the normal “docker logs” command, only the service modifier acquires the logs from the relevant swarm node.

Some services, like Mariadb, would have terrible performance if running via NFS, and this is where the node label comes into play. To limit a service to running on a specific node, a constraint can be set at create time (or via docker service update)

Will limit the service to running on a specific host, but what if you have multiple hosts with storage ? This is where you use labels.

Staying up to date

Updating running containers can be accomplished simply by issuing a

Now, in case you’re already running the “latest” label, you might need to add a “–force” option to the command, like this

Docker will then download the newest image, and recreate your container, which may or may not be on the same node as it was originally running on.

After having played around with the swarm for a few weeks, I finally got tired of having to take into account the armv6 and armv7 differences between the RPi B and the 2⁄3 models, and the model B is single core, with 512MB ram, so it’s not likely to be contributing much to the swarm performance anyway, so I decided to remove it from the swarm, and replace it with a new RPi3.

To remove a node from the swarm, i used

And waited for the node to be completely emptied. Then it’s simply a question of running

to remove the node. 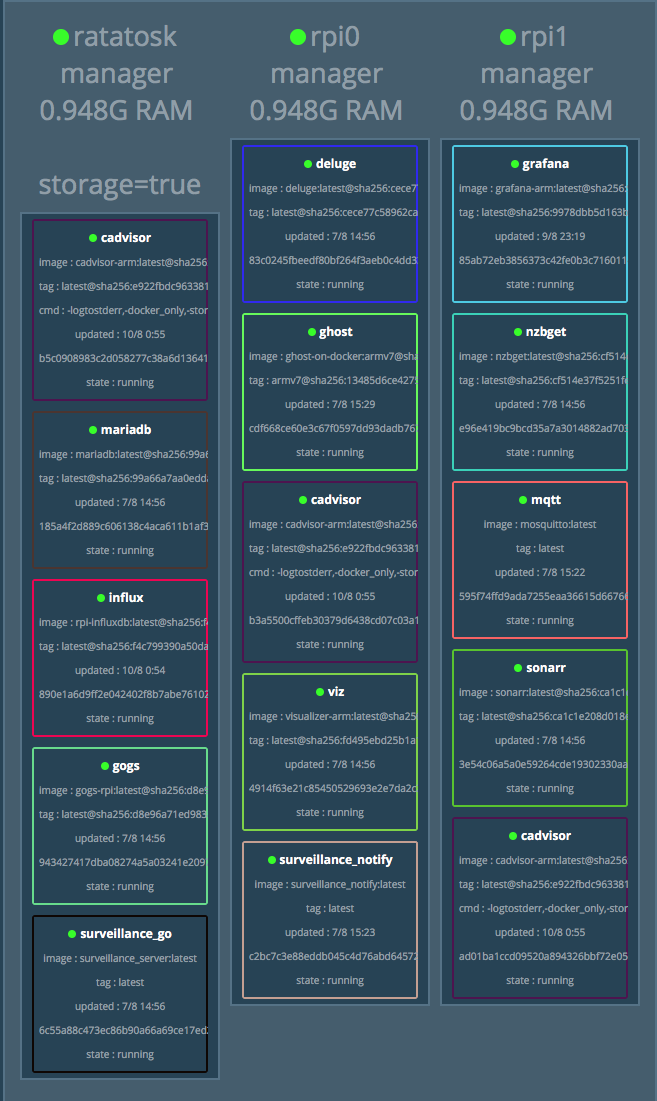 For keeping an eye on system resources, i setup a monitoring solution consisting of Influxdb, cAdvisor, and Grafana. I roughly followed the instructions from this tutorial, though i replaced the images with the following

While the above might not contribute much to the overall image of how the system behaves, it does allow you to see if something “sticks out”. Furthermore it allows you to dig down into each container and see how much the individual container is using.

Is it worth it ? As a learning experience i would say it is certainly worth it. It gives hands-on experience with technologies used in data centers all over the world.

Personally i already ran everything is Docker containers, though mostly on my Synology NAS, so the biggest hurdle has been finding arm compatible containers for the services i run. Sadly arm is not yet a first class citizen when it comes to prebuilt software on docker, and one could argue if it should become that ? it is after all still a “hobby” platform.

Performance wise the Raspberry Pi isn’t exactly a sprinter, but it gets the job done, and is quite capable at service static web pages, running a git server, etc.

My swarm is running 24⁄7, but my critical services, like surveillance are duplicated on my NAS. Because everything is running with MQTT as the backbone, and messages are broadcast to all subscribers on a given subject, this is easily accomplished. Likewise, IO intensive jobs aren’t really suited for running over USB2, so i’m keeping my database jobs running on the NAS.